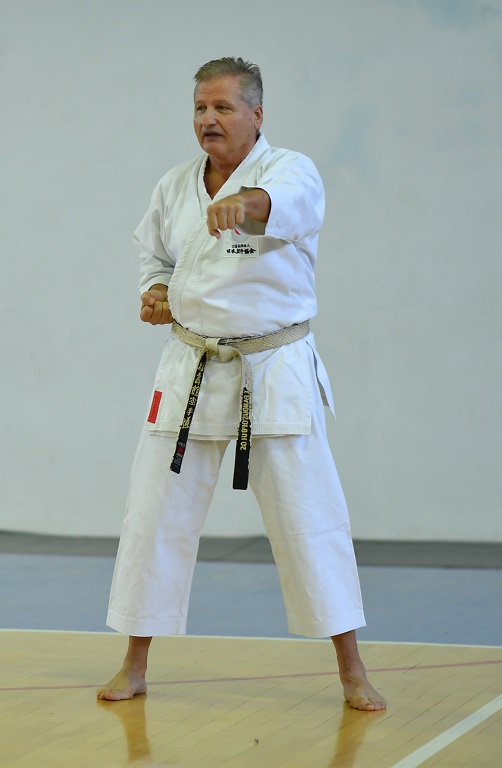 Panousopoulos Anastasios sensei was born in Psari, Arkadhia, Greece in 1950 and moved to Athens, Greece at the age of 7. His karate career started when he became a student of karate at the age 18 at the dojo of Veronis Ioannis sensei –named Budokan- in Ambelokipi, Athens where he remained for 20 years and from a student he came to be an instructor.

For 3 years he was apprenticed to Nishimura sensei, one of the most prominent instructors who had passed from the Budokan dojo. In 1973 Panousopoulos sensei – still with Nishimura sensei- participated in the World Championship in England where he advanced to the semifinals but eventually lost to the world champion of England, and front runner, Terry O’Neill. After that followed the European games in Yugoslavia and Italy where he participated with the national team. Up until 1980 Panousopoulos sensei took part in all national championships, always winning the first place. The distinguished athlet’s career succeeded the equally important role of the referee (national, global, European, Balkan).

Throughout his journey greatly had contributed the fact that he had apprenticed to some of the greatest Shotokan sensei, such as Enoeda sensei, Abbe sensei, Sirai sensei, Nishiyama sensei, Kawazoe sensei, Okamoto sensei, Naka sensei, Mori sensei, Okuma sensei, Sawada sensei and last but not least Ueki sensei. It is wrth noting that with many of the aforementioned, Panouspoulos sensei, was honored to referee alongside them in world championships.

In August of 2017, at the world championship in Ireland, Panousopoulos sensei, attended a seminar by Ueki SENSEI AND WAS DEEMED WORTHY OF THE Special Examiner diploma.

Panousopoulos sensei is the holder of 6 Dan, an official examiner by the JKA as well as the Chief Instructor of JKA in Greece.

From 1995 until 2005 Panousopoulos sensei was a trainer for the Hellenic Police Officer’s Academy.

Panouspoulos sensei has his own dojo in Galatsi, Greece since 1988 and to this day continues to share his passion for karate with young athletes.